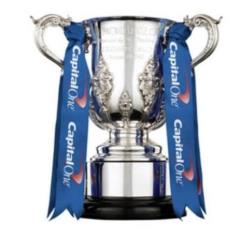 This weekend see the first piece of silverware of the season go up for grabs, as Liverpool take on Man City at Wembley on Sunday in the Capital One Cup.

This is a big opportunity for both teams to deliver a well needed boost to supporters as we approach an important stage of the season, where momentum is key, something which both teams are in need of.

Liverpool are looking to lift their first trophy since their League Cup win in 2012, whereas Man City only have to look back to 2014 which saw them land a Capital One Cup and Premier League Double.

January and February must have felt like the longest months of the year for the Liverpool squad with a huge fixture pile up, consisting of two FA Cup replays as well as the two semi-final legs of the Capital One Cup. A hard fought win in the Europa League on Thursday won’t have done them any favours either.

Man City have suffered mixed fortunes of late, their form took a significant dip following the announcement that Pep Guardiola will be their manager for next season, having suffered damaging defeats at the hands of Leicester and Tottenham in the league which was followed by an embarrassing FA Cup exit at the hands of Chelsea.

A well timed away win in the Champions League against Dynamo Kiev will have done a lot to set City back on the right track, it was only their second win in all competitions in February.

Both teams are unlikely to hold anything back in this game so we should see end to end action, in all honesty though I can only see a Man City victory on the cards.

The form and threat of Aguero is a frightening prospect for any team to face, with Kompany returning to marshal the defence and the pace they have in abundance, City are more than capable of soaking up any Liverpool pressure then run them ragged on the counter.

Liverpool might be boosted by the return of Sturridge, whilst paring him with Coutinho and Firmino can be an exciting proposition, their defensive frailties show no signs of letting up.

At the time of writing, Man City are clear favourites at 8/13 to lift the Capital One Cup, but should you fancy a bit of an upset you can get Liverpool at 5/4 to win in 90 minutes or 12/1 to topple City through penalties.

As we mentioned earlier, Sergio Aguero seems on fire and is capable of creating a goal from nothing, so it’s no surprise he leads the goal scoring odds at 7/2 to score first, but should Liverpool stun their opponents it’s likely Firmino will be on the end of it and he Brazilian is 17/2 to score first.

When the two teams faced off in November, Liverpool came away with a 4-1 win and with a total of 12 goals in the last three fixtures between these two sides, the over 3.5 goals market could be worth a punt at 9/4.