The stage is set for two highly anticipated showdowns tonight and as per usual Place a Bet Online will be sharing our pre-game thoughts on the proceedings. As all four teams prepare for the penultimate show down, who will navigate tough opponents and book their place in the Superbowl.

We will also be giving our usual predictions in our NFL accumulator and betting tips, which produced a winner last week to get us back to our winning ways. 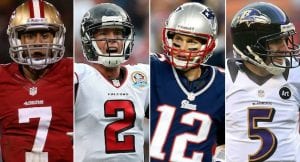 The Patriots and Ravens have faced each other six times over the past six years. In that time the Patriots have come out on four occasions, despite five of the six games being decided by six points or less.

The Ravens and Patriots have also butted heads three times in the last four post season tournaments, giving this championship decider more of a regular season feel to it; with plenty of previous experience to call on for both teams.

The story of the game may well be Ray Lewis, who has announced this will be his last season in the NFL.  Lewis’s announcement has appeared to spur the team on to make it a historical season for the potential hall of famer, as he and was unstoppable in the victory over the the first seeded Denver Broncos last week, despite being underdogs.

Will it be enough this week to move the Ravens past the second seeded Patriots and into the Super Bowl though?

Unlike the Broncos the Patriots showed no signs of being rusty following their bye week, brushing aside the Texans with a 13 point lead; if anything they have appeared to go from strength to strength.

Unfortunately for Belichik though, the Patriots have been dealt a huge blow with the loss of Rob Gronkowski for the remainder of the season through injury. But all is not lost, Steve Ridley has picked the right time to relearn how to carry the ball and there is always Welker and Hernandez to call upon.

The San Francisco 49ers postseason got off to a rough start, but they responded with a brilliant offensive performance that has afforded them their second consecutive NFC Conference Championship appearance; this time on the road against the Atlanta Falcons.

The Niners who are typically known for their defence, made an amazing spectacle of the game against the Packers. With much of the credit going to rookie QB Colin Kaepernick and rightly so, throwing for 263 yards and two touchdowns and run for a record 181 and another two scores.

Whereas the Falcons can consider themselves extremely lucky to be contesting the NFC division title.

Despite establishing a 20-0 lead against the Seahawks, the Falcons managed to completely capitulate at home and surrender their margin, finding themselves down by one point with just over 30 seconds left on the clock. But the Seahawks returned the favour and victory was sealed courtesy of a Matt Bryant field goal.

Not only does it show the resolve and prowess of the Falcons when it counts, it also gives the Niners the reassurance of knowing even if they concede an early lead, all is not lost and there will always be a window of opportunity.

Our predictions for the conference titles are;

All odds courtesy of Betfair.